The release.yml in this template enables GitHub Actions CI deployment to a dedicated server with SSH access.

release.yml is designed to work with a ServiceStack app deploying directly to a single server via SSH. A docker image is built and stored on GitHub's ghcr.io docker registry when a GitHub Release is created.

GitHub Actions specified in release.yml then copy files remotely via scp and use docker-compose to run the app remotely via SSH.

What's the process of release.yml? 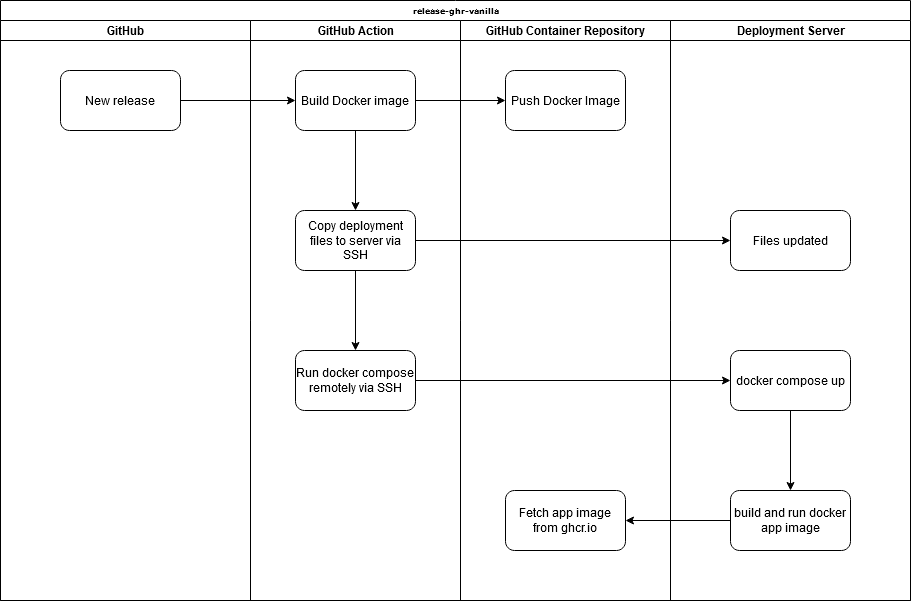 To get this working, a server needs to be setup with the following:

This can be your own server or any cloud hosted server like Digital Ocean, AWS, Azure etc.

When setting up your server, you'll want to use a dedicated SSH key for access to be used by GitHub Actions. GitHub Actions will need the private SSH key within a GitHub Secret to authenticate. This can be done via ssh-keygen and copying the public key to the authorized clients on the server.

For example, once copied to remote ~/nginx-proxy-compose.yml, the following command can be run on the remote server.

This will run an nginx reverse proxy along with a companion container that will watch for additional containers in the same docker network and attempt to initialize them with valid TLS certificates.

This template pushes the API server dockerized application to GitHub Container Repository. To do this, you will first need to create a Personal Access Token specifically for use by release.yml GitHub Actions.

This token will need to have access to write:packages to the GitHub Package Registry, which includes the GitHub Container Registry.

The first time the release.yml process successfully runs and creates your GitHub Container Repository for your project, you then have the option to upgrade the workflow to use GITHUB_TOKEN replacing the CR_PAT.

The release.yml assumes 5 secrets have been set:

To also enable deploying static assets to a CDN:

These secrets are used to populate variables within GitHub Actions and other configuration files.

The Next.js ui application is built and deployed to GitHub Pages during the release.yml workflow process by committing the result of npm run build to gh-pages branch in the repository.

Variable replacement of $DEPLOY_API and $DEPLOY_CDN is performed on the following files as a way to coordinate configuration between the ui and api project.

The post.build.js script helps when also publishing /ui assets to CDN by first copying the generated index.html home page into 404.html in order to enable full page reloads to use SPA client routing:

Whilst the _redirects file is a convention supported by many popular Jamstack CDNs that sets up a new rule that proxies /api* requests to where the production .NET App is deployed to in order for API requests to not need CORS:

By default this template doesn't use the /api proxy route & makes CORS API requests so it can be freely hosted on GitHub pages CDN.

By default, deployments of both the ui and api occur on commit to your main branch. A new Docker image for your ServiceStack API is produced, pushed to GHCR.io and hosted on your Linux server with Docker Compose. Your React UI is built and pushed to the repository GitHub Pages.

The template also will run the release process on the creation of a GitHub Release making it easier to switch to manual production releases.

Additionally, the release.yml workflow can be run manually specifying a version. This enables production rollbacks based on previously tagged releases. A release must have already been created for the rollback build to work, it doesn't create a new Docker build based on previous code state, only redeploys as existing Docker image.

The CorsFeature needs to be enabled when adopting our recommended deployment configuration of having static /wwwroot assets hosted from a CDN in order to make cross-domain requests to your .NET APIs.

Should you want to, our recommended approach to avoid your App making CORS requests is to define an /api proxy route on your CDN to your $DEPLOY_API server.

To better support this use-case, this template includes populating the _redirects file used by popular CDNs like Cloudflare proxy redirects and Netlify proxies to define redirect and proxy rules. For AWS CloudFront you would need to define a Behavior for a custom origin.

Of course the easiest solution is to not need CORS in the first place by not deploying to a CDN and serving both /api and UI from your .NET App. But this would forgo all the performance & UX benefits that has made Jamstack approach so popular.